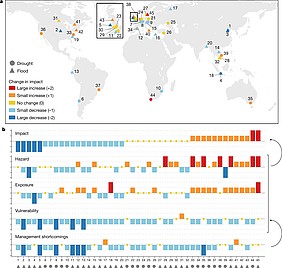 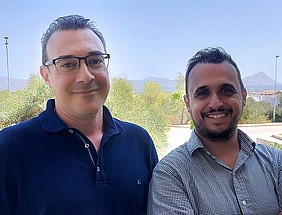 A study was recently published in the leading journal Nature (IF: 49.9) that examines the effectiveness of flood and drought risk management on a global scale with the participation of associate professor A. Koutroulis and lead scientist Dr. M. Grillakis at the School of Chemical and Environmental Engineering, Technical University of Crete. Empirical data from floods and droughts that hit the same place twice have shown that risk management alone cannot reduce the effects of extreme events, especially when extreme events are of unprecedented intensity. The authors note that the observed difficulty of managing unprecedented events of high magnitude is alarming, given the higher likelihood of extreme hydrological events due to climate change.

26 pairs of floods and 19 pairs of droughts that occurred between 1947 and 2019 were analyzed, with each pair occurring in the same region. The two events of each pair were compared in terms of: hazard severity, population exposure (who was at risk), vulnerability (ability to cope with the disaster), risk management strategies in place (such as early warning systems, reservoirs or levees), and the impact (loss of life and economic damage). The extensive documentation and classification of each pair of events resulted in a valuable dataset on changes in the impacts of hydrological extremes over time, available to the scientific community for further analysis.

The main findings of the study are:

The study concludes on three success factors: (1) effective governance of risk and emergency management, including transboundary partnerships, as in the case of transboundary rivers; (2) high investment in structural and non-structural measures, and (3) improved early warning and real-time monitoring systems. Universal and proactive implementation of these factors will help to reverse the current trend of increasing impacts related to climate change.

Referenced as well, in: