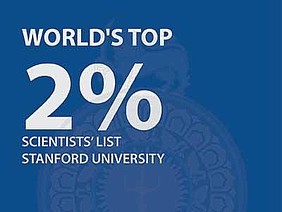 Twelve staff members of the School of Chemical and Environmental Engineering, Technical University of Crete (half of the Schools’ Faculty) are recognized on the list of the “World’s Top 2% Scientists” published by Stanford University. The lists presents the ranking of the world’s most cited researchers and those who are among the top 2% of more than six million scientists worldwide within their specialty areas (22 major fields and 176 subfields) and who have published at least 5 papers. This list has been published in October 2021 by Elsevier and was based on data from Scopus.

The first list presents the ranking for a single year, 2020. Our staff members included in this list are (in order of ranking):

The list of top scientists based on career-long data includes 10 Faculty members of our School in the following ranking order: