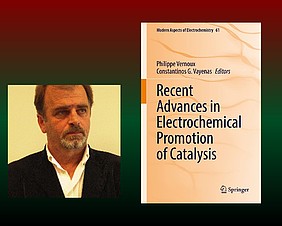 Ioannis V. Yentekakis, Professor and Vice-Dean of the School of Chemical & Environmental Engineering, and Director of the "Physical Chemistry and Chemical Processes" laboratory, is the author of two chapters (Chapter 4 and Chapter 5) entitled "The Effective-Double-Layer as an Efficient Tool for the Design of Sinter-Resistant Catalysts" and "EPOC with Alkaline Conductors: Implementations in Emission Control Catalysis", respectively, in the International Book of Springer-Nature “Recent Advances in Electrochemical Promotion of Catalysis” recently published.

The Editors of the Book in the Book preface make special mention of the theoretical and practical importance of the new phenomenon of stabilization of the nanostructure of industrial catalysts which was recently discovered in the Laboratory of Physical Chemistry & Chemical Processes, School of Chemical and Environmental Engineering of our Institution by Professor Ioannis V. Yentekakis and his team: «In the course of this phenomenon, a major discovery was made by Professor Ioannis Yentekakis at the Technical University of Crete at Chania. He found that the spontaneously formed effective-double-layer ([Oδ-, δ+]) on the catalyst particles, resulting from the thermally driven oxygen back-spillover from high OSC (oxygen storage capacity) supports, can strongly increase the thermal resistance of metallic nanoparticles (Chap.4). This is a very important theoretical and practical finding which will be almost certainly fully utilized by the catalyst manufacturing industry. The use of EPOC to face very important environmental challenges is described subsequently by the second chapter of Professor Ioannis Yentekakis (Chap.5), coauthored with Professors Philippe Vernoux and Angel Caravaca».