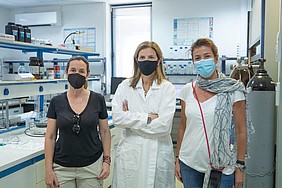 On Friday the 28th of May, D. Angeliki Kosmopoulou (Executive Director), Peggy Xirotagarou (Program Coordinator) and a three-member team of the Athanasios K. Laskaridis Charitable Foundation visited the Technical University of Crete. During their visit, they discussed their collaboration with Elia Psillakis, Professor of the School of Environmental Engineering of the Technical University of Crete and Director of the Laboratory of Aquatic Chemistry. The new collaboration concerns research and educational issues related to marine pollution from microplastics. The Laboratory of Aquatic Chemistry is responsible for processing and evaluating the data of the "Typhoon Project" whose main goal is the cleanup of the Greek coastline from plastics. The "Typhoon Project" was established in 2019 and uses the operational ship "Typhoon" of the Charitable Foundation to seamlessly clean Greek shores. The Laboratory of Aquatic Chemistry will use the data of these cleanups for studying and evaluating the plastic pollution on the Greek beaches and draw conclusions regarding the effect of the pandemic on plastic pollution in Greece, next to study the dispersion of these pollutants depending on the population, geographical location, season and sea currents. In this context, future cleanups will also be optimized, targeting areas with the greatest environmental burden. "Typhoon" functions as a research base for two other Greek scientific teams that study marine pollution. These are the University of Patras on topics of recording benthic, floating and coastal waste using state-of-the-art technologies and the University of the Aegean in pioneering experiments for the detection and quantification of plastic waste at sea.

The Athanasios C. Laskaridis Charitable Foundation will also collaborate with Prof. Elia Psillakis within the context of Citizens Science that uses modern technology for the protection, research and recording of marine pollution. The practice of public participation and cooperation in the field of scientific research to increase scientific knowledge is a modern research trend where citizens take an active role in monitoring, collecting and even processing marine pollution data using scientific equipment and open access software. It should be emphasized that Prof. Elia Psillakis is a Working Group Leader of the European program COST Action 16215 PortASAP "European network for the promotion of portable, cheap and simple analytical tools” which includes the development of new open access analytical devices